Fourth round, Copland coming forward from the bell, advancing behind the jab.

Camilleri still making things difficult for Copland though, and now they clinch.

Oh now Camilleri comes in and catches with two, clean hits before darting away from the swinging arms of Copland.

Copland has come down from super middle to middleweight for this, and looks a little bit sluggish.

Two good shots from Camilleri, a left and a right before darting away again.

Good exchange in the middle of the ring, Copland finally landing a couple of his own, but Camilleri, who won both the first two rounds, is dancing all over the place, making a very difficult target.

Copland throws a couple of jabs, only for Camilleri to windmill in and force the larger man back.

Copland is starting to stalk Camilleri a bit more now though.

Copland leads with a job, and is caught by a left hook at the bell in response. Much more even that round but I’d give it to Camilleri again. Lots of work to do for Copland.

Windmill stuff from Camilleri, and Copland hits the deck early in the second!

He threw the first swinging left over the top, then advanced, catching Copland with a couple of strong right hands and down went Copland in the corner.

He’s settled a little, Copland, but Camilleri is still bouncing around like a hyperactive toddler in the middle of the ring, darting in, darting out. It’s wild stuff from the 30-year-old.

Copland survives the round, but that will likely be a 10-8 round to Camilleri.

This could be an interesting middleweight contest, six rounds.

Camilleri has been sparing with Tszyu due to his awkward style, and despite giving up a height and reach advantage, Camilleri is on the front foot and showing a lot more movement in the first round.

What songs have we got so far?

-Eye of the tiger

No Survivor yet, Eye of the tiger.

There’s been a bit of hip hop, a bit of Queen, some Indigenous music from Patrick Clarke. A good mix so far.

The Main Event commentators are talking about the last major sticking point that the two fighters have not been able to agree upon, who will walk out first.

Apparently, Tszyu has been told to go first … and has subsequently refused.

So who knows, maybe we won’t get a fight in the ring because they’re both going to refuse to go first…

I kinda hope they’ve come out together, holding hands and skipping to highlight how juvenile the argument is becoming.

Tim Tszyu in the building

When is Horn Tzsyu due to start?

What time is the main bout?

This is a different blog to normal…

G’day Simon – this should be less stressful than the other blog you’ve been involved in lately. Any chance of a fighting goat gif?

Did someone say GOAT?

Yep, back to the day job for an evening.

Have a great night Sims.You’ve got a great gig man!

I’m not going to lie, I’m looking forward to this more than the coronavirus blog, a nice change of pace…

I do like the bow-tie on the ref. However I think adding a waist-coat and a top hat would look nicer.

This would undoubtedly be better attire, hands down…

Although former champion Barry Michael and Main Event host Eddie McGuire are both in full bow ties in the studio.

I’ve not had the pleasure yet, but it looks to be a fantastic venue.

If you have been there, or are going tonight, let me know what you think of the venue.

There will be 16,000, physically distanced fight fans there tonight. Not many in yet, but there’s still a long way to go before the main event gets underway…

Thanks Simon for the live updates, it is bound to be a crackerjack contest.

A good omen for Jeff? His brother Ben has won his second straight contest to move to 2-2.

Patrick Clarke looked a little nervous to be honest, too tentative and not using the jab well enough for me.

Why is Horn underdog?

Can’t understand why Jeff Horn is the underdog. He’s very tough and has super heavy hands and has had hard fights. Look out Tim your lights might go out tonight but your time will come later

I’m with you, Jeffrey.

The former world champion is still a major underdog with the bookies, although some players in the Australian boxing scene have said that should not be the case, including Michael Zerafa and Jeff Fenech.

It is a fight that is coming quite early in Tim Tszyu’s career, possibly too early given Horn’s general awkwardness and, as you said, toughness. It’s a risk however you look at it from Tszyu.

It’s a fascinating fight in any case.

Sorry, I think you’re in the wrong place

Entertaining start to this fight, Clarke working the jab, but Horn getting inside and working the clinches pretty well.

There was a slight issue with Clarke’s glove strapping at the beginning of the first, so the referee bit it off… Not seen that before…

Better start to the second round from Clarke, who looks a tidy fighter, but a little bit tentative going forward.

Here come Ben Horn and Patrick Clarke for their welterweight clash, just to show the masks being worn by security.

It’s Clarke’s debut, but he has been a very active amateur, with over 40 fights.

Ben Horn has a pro-record of 1-2, but his latest fight was a win on the undercard of Jeff Horn vs Michael Zerafa 2 in Brisbane last December.

Interestingly, Clarke fought Jeff as an amateur, and lost to the future world champ with a second-round stoppage.

They have quite similar styles, nice wide stance, good pure boxing style, rangy left-hand that will look to keep opponents at bay.

I think you’ll like what you see from young Tim, Peter.

Not sure which of the fights on the undercard you should be interested in?

Well perhaps this next one should tickle your fancy. 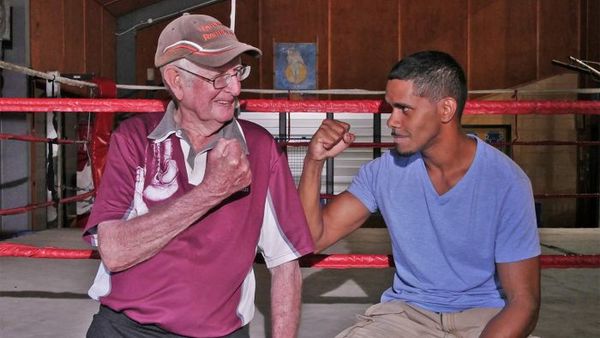 Clarke is hoping to make his 83-year-old mentor proud, as well as his entire Palm Island community when he meets Ben Horn, brother of Jeff, in a four-round welterweight clash.

It’s Clarke’s first professional bout and he hopes he can use it to inspire the youth of Palm Island.